Squeeze–a powerful and easy-to-use encoding tool for rendering the highest-quality video and audio files–has been produced by Sorenson Media for over ten years. The desktop software includes NLE plug-ins for Avid Media Composer, Final Cut Pro, and Adobe Premiere to streamline professional video workflows. Squeeze supports one of the most extensive collections of input and output formats commonly used today and is perfect for rendering media files for the web, cell phones, disc players, and Apple’s iOS devices. The advanced features of Squeeze meet the demands of professional multimedia creators and offers a vast selection of customized encoding presets that require only limited knowledge of the complexities of video encoding.

Squeeze Desktop is Sorenson Media’s workhorse video encoding tool that will render the highest-quality video and audio files for professionals and hobbyists alike. Manipulate resolution, file output, and other specifications to create the finished video product you need. Use Squeeze to encode videos that you’ve created in Final Cut Pro, Avid, or Adobe Premiere to ensure that they come out looking as good as you imagined. Or use Squeeze to update your home movies so you can share them at a family reunion. Whatever the reason, Squeeze is your best video encoding option. Squeeze supports the most common input and output formats to ensure that your video can be shown virtually anywhere. Check out the different versions of Squeeze to find which best meets your needs. 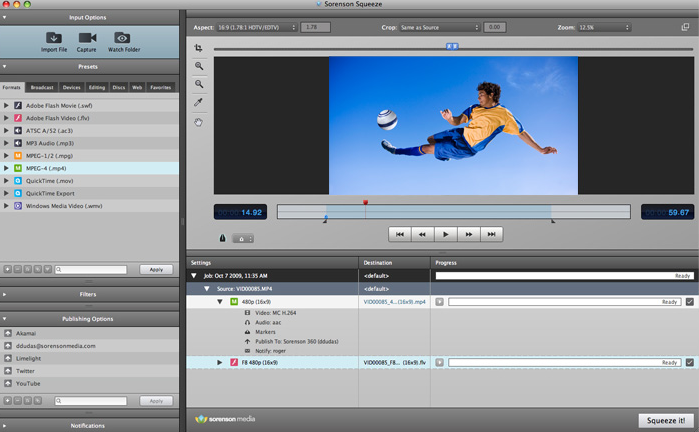