Dragon (formerly known as Dragon Dictate) a streamlined and user-friendly OS X voice recognition based application that makes it possible to dictate text to your Mac, control it using voice commands and transcribe audio files to text based documents.

The Dragon utility features a powerful and accurate speech recognition engine designed to make your Mac smarter by helping it understand what you’re saying.

This works via the OS X’s built-in Accessibility features and the AppleScript scripting integration of most Mac apps, allowing you to first of all control them using only your voice and, second, to take advantage of Dragon’s built-in compressive and versatile vocabulary to get your point across easier.

If you want to make the most out of using Dragon on your Mac, you should make sure that you’re using the Nuance-approved noise-canceling headset microphone for Mac that comes with all purchased licenses (a Bluetooth mic can be used for the wireless version).

In order to get Dragon working on your Mac, you will first have to help it learn the way you speak using a voice sample. This way Dragon will be able to learn your voice’s inflections and start to accommodate with the way you’re pronouncing words, and you will also train yourself to speak clearer and more smoothly so that your Mac can understand you.

Once the training process is over and you’ve learned all the terms recognized by Dragon to let you control various apps, you can also extend its vocabulary manually by adding new words and ways to figure out what you’re saying easier and faster.

After you’ve got Dragon configured, you can use it to dictate text to a word processor of your choice. All that you have to do is to move the cursor within a new document and, once you start talking, the app will automatically start typing down everything you say.

Furthermore, Dragon is also capable of quickly transcribing audio content to text based documents. This could prove very useful for transcribing audio notes from your smartphone to text, without the need of a secretary or assistant to do it for you.

Controlling OS X apps is another noteworthy feature of Dragon, a powerful tool designed to help you take control of your apps’ behavior using only your voice.

Taking everything into consideration, Dragon is a huge productivity boost and a robust voice recognition software solution, designed to be of use to both business professionals and home users. 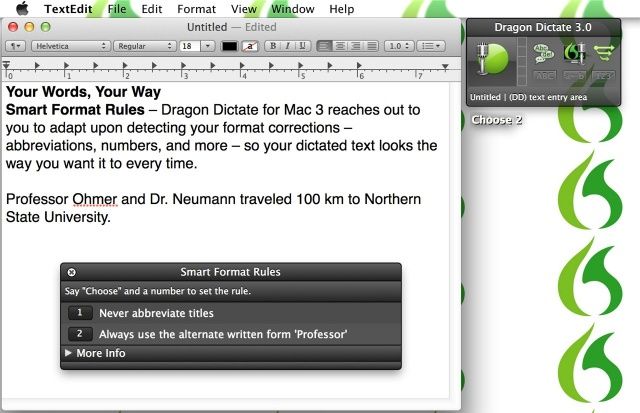