There are 2 big improvements in Magican 1.4.7, Firewall and Fan Speed Control. The newly added Firewall helps users detect each process online speed. Besides display the download and update speed in real time, Firewall offers the history record to check former connections. And users can find and close the one which takes much to get more enjoyable Internet experience. It means that users can optimize the internet more conveniently through the assistance of Magican Firewall.Then comes to the Fan speed control, a switch was added in the Fan Speed Control according to users’ feedback. Now users can turn off the Fan Speed control easily. Moreover, the new version of Magican has also fixed the minor bugs and other previously reported issues.

With these two features joined in, Magican turns to be more effective in Mac OSX optimization. As a professional and multi-functional software, Magican is totally free and few in number. Except the function of Firewall and Fan Control, Magican also can clean logs, caches and leftovers and provide real-time monitor of the temperature and CPU occupation. Magican is a freeware solution that can rival similar programs for sale, Magican represents an advent product in monitoring and functional utilities for Mac OS X.

Magican lets you carry out several basic operations in a floating window. For instance, Magican monitors the network traffic in an absolutely new way, and the “Purge RAM” can help you quickly convert the inactive memory into free memory. In addition, you can also get the local weather forecast and terminate unnecessary processes in the floating window. 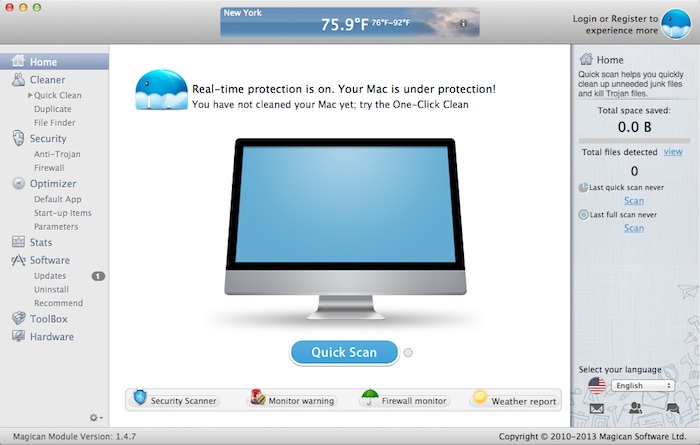