Revenge will consume you, but redemption will push you to your breaking point. Play as Dusty, a duel weapon wielding warrior ready to face loads of outlawed criminals, dangerous creatures and the ruthless evil villain that rules them all. Meet friends along the way with new weapons and talents, journey through lavishly drawn environments and work together to fulfill your unquenchable thirst for vengeance.

– Intense story: Consumed for revenge after the love of his life is killed, Dusty crosses paths with 2 unlikely allies who are each seeking out the same enemy for a different reason. As the three set out to destroy the responsible band of villains and anyone else that stands in their way, they unravel a scheme much bigger than their personal vendettas.

– 3 unique characters with their own weapons and mechanics: Play as Dusty, a vicious multi gun wielding madman that boasts intense melee attacks. Players can also call upon two support characters, Rondel the artillery support who tramples enemies with a massive arsenal of weaponry and beastly rocket launchers, and McCoy the sharpshooter who takes down loads of enemies stealthily with his deadly accurate rifle.

– 9 Gorgeously drawn environments: Venture through cavernous wastelands, western ghost towns and deadly jungle environments in your quest for blood. You never know what to expect from the each of the unique and precarious worlds!

– Hordes of menacing villains: A whole slew of enemies are out there ready to kill. From aggressive predatory vermin, vicious stalking felines, venomous mechanical snakes and giant armored gorillas, all run by the enigmatic leader Craven. 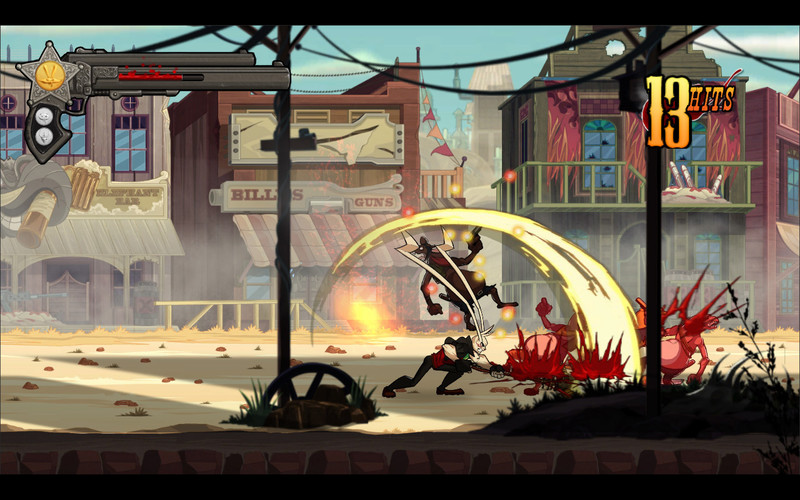