iLife 2013 – Everything your digital life needs: iPhoto, iMovie and GarageBand.

Apple unveiled new versions of its iLife suite of apps for both iOS and OS X, with all apps being rewritten to include 64-bit compatibility and include various new features. Apps in the iLife suite have been revamped for both platforms, with iPhoto receiving a new look on iOS along with the ability to create and order photo books on the iPad. iMovie has also received a cleaner, simpler look on iOS 7 with easier ways to browse and share video, including desktop-class effects such as slow-down and picture-in-picture video on the iPad. Lastly, GarageBand for Mac now allows users to add up to 16 tracks on 32-bit iOS devices and up to 32 tracks on 64-bit iOS devices, with a new feature called “Drummer” providing automatic and customizable drumming accompaniment. 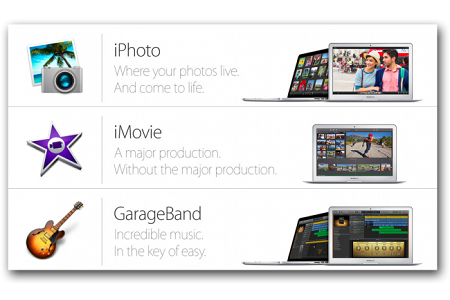