iCalamus is a desktop publishing solution that allows you to create documents with text, photos, and other visual elements.

iCalamus has been developed completely new for Apple’s operating system. iCalamus is an excellent choice for all layout purposes from simple posters and business letters over complex layouted magazines up to books and scientific works. Complete Unicode support and the smart PDF import offer easy access to creating and layout work. The reasoned user interface with its low learning curve guarantees for fast success. iCalamus doesn’t limit your layout freedom by offering prepared layouts. Its practical tools offer all options for your own creative and productive layout work.

iCalamus is a modular program which will grow in future by external modules, even from third-party developers. Therefore invers Software will create an Open Development Area (ODA) and publish the plug-in interface. iCalamus has been developed in Objective C with intensive usage of Apple’s Cocoa library.

You can import all image and text formats which are supported by Mac OS X into iCalamus documents. Images from digital cameras scanners or iPhoto libraries can be imported as well as whole Web page content and PDF documents. Grab text content from large PDF documents easily for further text processing. Elaborated masking options and many predefined, partly dynamically changeable frame shapes offer freedom for creativity. Working in precise measurement units is the other side of the iCalamus world. Use virtual copies for multiple document elements and change them afterwards with a few mouse clicks. 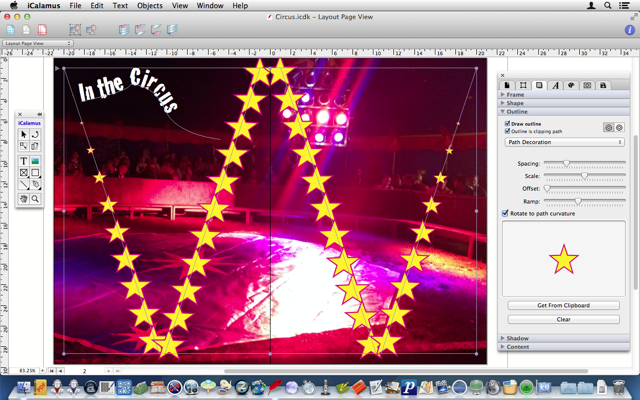