Hydra Pro (was Hydra + Aperture Plug-In) provides human eye-like perception to your photographs by allowing you to create High Dynamic Range (HDR) images from a series of regular photographs (up to 7), either from DSLRs or traditional point-and-shoot cameras. This is because a single photograph cannot represent the full gamut of light due to the physical limitations in the sensor.

Hydra does not require pictures taken with a tripod, as it is usually the case with HDR software. This is a unique feature that means you can take photos anywhere without a tripod to later merge them in Hydra.

Hydra uses an advanced image processing pipeline that first aligns the imported images and then merges them in a smart way to preserve the interesting inputs of each image. This method has been entirely implemented on the GPU to provide interactive previewing. This allows you to finely tune all parameters in real-time while observing the changing result until you are satisfied, and then render the full resolution image (resolutions above 20 Mega Pixels supported) in less than a minute. The output produced by Hydra is much closer to what your eyes actually see.

Hydra is also available as a Aperture Plug-In for Aperture and Lightroom so that you can create HDR images right from within Aperture or Lightroom.

Last but not least, Hydra 3.0 introduces many new options: ghost handling, cropping, vignetting, batch processing, tone mapping presets… Thanks to these pro options, you can preprocess and postprocess your photographs and get the result you are looking for.Hydra (stand-alone version and Aperture/Lightroom plug-ins) is available in English, French, and German. 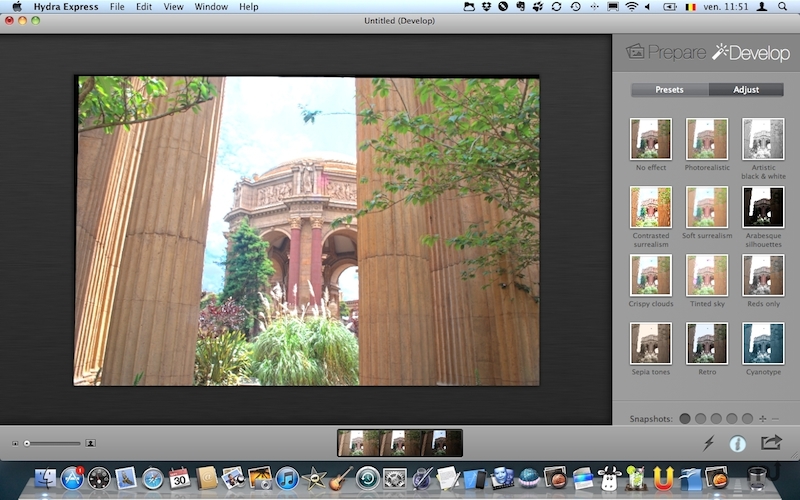